Ariana Nasr loves music.  And she is not afraid to show it.  Whether she is singing Édith Piaf, an Italian art song or a jazz standard, she will give you everything she’s got (and sometimes more).

In 2015 Ariana developed a full-​blown spectacle en français featuring the music of the world-​renowned French singer, Édith Piaf.  Since then, she has done more than 50 performances of the show, delighting audiences from Alberta to Labrador, including presentations at the Halifax Jazz Festival, Deep Roots Music Festival, Alliance Française Halifax, Edmonton and Calgary, Mosaiq Multicultural Festival in Moncton, and sold-out performances at the Chester Playhouse, The Carleton, Kings Theatre and the Al Whittle Theatre.

In 2016 Ariana added Jacques Brel to the theatrical presentation, dressing and performing as Édith Piaf for the first set and as Jacques Brel for the second, and acting out her own English translations between songs.

In addition to singing, Ariana also plays saxophone, accordion and violin in a variety of genres.  Other acts in which she participates include the world music ensemble ASHK (with Sahara Nasr, Kamila Nasr and Ken Shorley), and the duo act Nasr & Thorpe with her partner Curtis Thorpe.

A CD “La Vie en Rose” including many of Édith’s hit songs (Non, je ne regrette rien, Hymne à l’amour, La Vie en rose, Padam… Padam) was released in April 2015. This CD is out of print however...
A new CD is coming in June 2018: Padam Padam by Ariana Nasr and Curtis Thorpe is a collection of classic popular songs from France, the Balkans and North America

Testimonials from people who have seen the "Ariana Nasr chante Piaf" show:

“I am passionate about Ariana Nasr's amazing voice and genuine and riveting stage presence. Her show is masterful and moving.  It's thrilling to be so near to both Edith Piaf and Jacques Brel in one night”  -Cathy Jones (This Hour has 22 Minutes)

“So, so good and almost inexpressibly cool.” — Mike Campbell (Owner of The Carleton, Halifax NS)

“What a singer! Dramatic, theatrical, and so very musical. She does not imitate but rather, channels Piaf and truly embodies those glorious songs.” — François Côté (Deep Roots Music Coop)

“This show is outstanding. Two standing-O’s last night were well deserved. Ariana knocks your socks off with her incredible performance. A must-​see!” — Marke Slipp

“We saw Ariana’s performance last night. If you haven’t seen this show, then find out when it is playing near you and GO! She is fantastic, and the songs are timeless.” — Ben Robertson

“Do not miss any chance to hear this amazing voice!!!” — Cynthia Myers 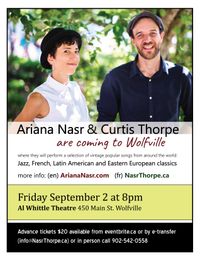 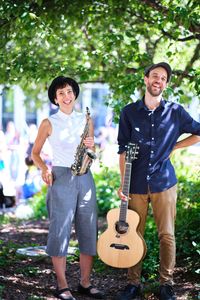